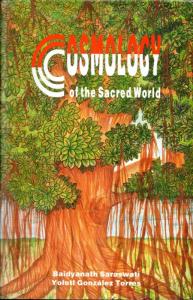 Cosmology of the Sacred World.

The present paper considers some aspects of the cosmology, as a global thought system, which regulates and guarantees the welfare and the ethnicity of the Paez society, expressed in different moments of daily life, as a 'cultural ethic' which rules individual and social conduct and the relationship with the environment. This is a product of the exercise of comprehension and significance which is made of the cosmos, in order to understand, explain and project it in forms of intercultural relationships.

This approximation to the Paez cosmology is achieved from three fundamental points:

Territory: Understood as the semanticization that the group makes of the physical-geographical space where culture unfolds. Seen as a possibility of traversing a path "which leads from the photographic objectivity of a 'human landscape' to the complicated mental and meaningful structures which sustain and make them human". (Garcia: 1976:13).

The relationship human body Paez-Natwe: The human being is perceived as intimately bound to nature, identified with it; a conception where the motivations can be found in the interplay of representations of mythical and religious identities. As Bastien observes in reference to the Andean world: "They see systems of nature as the identification of themselves".

Cleansing, renewal and offering rituals: These give evidence of the integral cosmological system carefully regulated and officiated by the the 'walas (wise men) who permanently socialize cultural normativity.